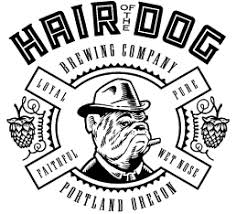 2012 saw a unique collaboration between one of Belgium’s newer microbreweries and one of Oregon’s oldest, but smallest microbreweries: De Struise Brouwers and Hair of the Dog Brewing.  Urbain Coutteau started De Struise in 2003 in the city of Oostvleteren, Belgium and has quickly become a popular and well rated brewery winning many fan polls and awards.  Alan Sprints started Hair of the Dog in 1991 in Portland, Oregon which quickly inspired a rabid following of beer lovers with his unique barrel-aged beers and his quirky style.  What makes the beer world truly amazing is that two brewers with such apparently similar desires to create quirky, unique and outstanding beers managed to find each other and decide to make beer together.

Aroma: subtle citrus, wheat with a touch of spice

Taste: Soft and wheat-y with subtle spicing.  Light but gently lingering finish with a touch of coriander.  This was a very dry white.

Overall Impression: Some representatives of the style can be a bit cloying.  This would be great summer quaffer.

Aroma: Light, spicy hoppiness with perhaps a touch of citrus.  Touches of caramel and fig from the malts.

Taste: Rich maltiness with brown sugar, dried cherry and a spicy, earthy finish from the hops.

Overall Impression: If you go into this beer expecting an American style IPA, you’ll be disappointed.  I could tell from some of the conversations that I overheard that people weren’t getting this beer.  The local hop-heads were wanting something in line with Alan’s Blue Dot IPA, which they didn’t get.  You’ll be totally happy if you keep an open mind and enjoy this completely Belgian interpretation of the style.  It was balanced, rich but clean with a refreshing hop finish.  Outstanding.

Overall Impression: This is the closest a Belgian brewer has come to achieving an American IPA/Double IPA.

Overall Impression:  Personally, this was my favorite of the 2 tripels.  I liked the dryness and spicy bite that the rye added.  This was a much more drinkable tripel.  The other was a bit too sweet for any sort of sustained drinking.

Overall Impression: This is a DANGEROUS beer.  It’s very balanced and drinkable and at 10% ABV, could find yourself embarking an interesting evening if you delved too deep into this beer.

Overall Impression: This is a lovely beer.  For the strength and flavor intensity, it’s got a nice balance that would make it a very enjoyable sipping experience.

It required a lot of concentration to work through 8 intense beers.  I only wish I’d had time to sit and get a full glass or two and chat with friends.  Perhaps I’ll have to pay Urbain a visit when I’m in Belgium. At the end, I spoke briefly with Urbain and Alan and found out that their collaboration beers might be ready next year or the year after.  No rush really…